This one should be easier to remember:

theterriblezodinezine (at) yahoo.co.uk
Posted by Le Mc at 21:08 No comments:

Check out the fascinating interview with DAN MCDAID (and his amazing art).

This issue sees several articles on boys, girls, and Doctor Who, from how Karen Dunn met her true love at a Doctor Who convention in Swindon, to how Evan Keraminas proved her Lance wasn't like the one in "Runaway Bride." And why Steven Sautter wishes he had two hearts. There's also how Jamie Beckwith and Lori Jansen, on opposite ends of the globe, made friends with fellow Doctor Who fans after years of solitude.

There's a bumper edition of Back2theWhoture, a set of Sarah Jane Smith paper dolls, The Waters of Marzipan and Doctor Who A-Z.

And much much more!!

PS as the editor is bleary-eyed and exhausted due to completely ignored deadlines, her own frenetic and punishing work schedule, and her ridiculous aspirations of perfection, typos will undoubtedly occur. Please POLITELY make her aware of them and she will take measures to fix them as soon as she can. Thank you for your patience and awareness that I am merely a human being after all.

Time continues to trot along, and next weekend is the deadline for inclusion in TTZ5.

What I'm hoping this issue will include:

Yes, it will soon be a year since TTZ's very first issue. And what a year. It was a little lean on Doctor Who proper, but we had Torchwood and now Sarah Jane to keep us happy. And very soon "Waters of Mars"!

TTZ5 we hope will be similarly spectacular, but first we need submissions! Please send yours in by 15 November!
Posted by Le Mc at 13:59 No comments:

Soon it will be a year since the very first TTZ came out, and it will be time for Doctor Who's 46th birthday.

In anticipation of this, the deadline for submissions to TTZ5 is 15 November. Please send me your ideas, articles, and art, by e-mailing scots_rock_god (at) msn.com.

Or you can message me on Facebook. Or write on the group wall or the discussion board.

Let me say that though it's done,
for its shortcomings, I'm the one
you should blame, not Lori, whose
editorial eye should earn your dues.
Thanks to Rich for his lovely art.
I've tried my best to tear apart
the text for typos. I'm afraid
that's all I can do. That said,
I hope you enjoy the 'zine, if not
the couplets. My brain is shot.
***
Read, enjoy, please bring typos or errors to my attention here on the blog, on Facebook, or e-mail me at scots_rock_god@msn.com. Don't forget I'll be accepting contributions for TTZ5!

TTZ4's deadline has come and gone, yet I'm still waiting on some material. I hope to have the whole thing done by 15 September as promised, but I can't guarantee it. 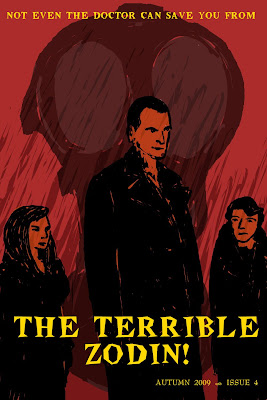 The new deadline for TTZ4 submissions is 30 August. TTZ4 is already quite packed with great article and art ideas, so if you'd like to be considered for this issue please get your stuff in as soon as possible and definitely before the deadline.

Remember that our second version of Back2theWhoture will include "Genesis of the Daleks" and "Time-Flight" to watch them and give us your 200 words or less.

Remember, the first one to decipher them all correctly wins a prize!

Style Sheet and Guidelines for TTZ

What’s a style sheet? Well, for complex publications (like Doctor Who Magazine, for example, or Scribendi) it’s a very long list of rules and guidelines to make the editors’ lives easier. It’s basically where all the style rules are kept so that the editors don’t go crazy trying to figure out whether their publication uses “that” or “which” and reminding people of common grammar mistakes like split infinitives and possessives (it’s = it is, its=belonging to something). For TTZ we’re going to keep it simple because my contributors aren’t getting paid so I don’t want to make their lives harder. Neither, however, do I want to spend valuable editing time changing everything that should be bolded from quotes. Here are just some useful (I hope) guidelines for writing an article in our house style.

1. Titles of books, plays, musical albums, magazines, and the titles of films and TV shows are bolded.
Ex: Vampire Science
The Dalek Invasion of Earth 2150
Doctor Who
The Sarah Jane Adventures
Moby-Dick
The correct way to cite this magazine is TTZ (+ issue number) or The Terrible Zodin.

2. Episodes of a TV show are bolded within quote marks/inverted commas.
Ex: “Full Circle”
“They Keep Killing Suzie”
For story arcs, individual episodes are still cited in the above manner:
Ex: “Stones of Blood”
while the arcs themselves are treated like short story titles below.
Short story titles, titles of essays or articles, song titles, and chapter titles are within quote marks/inverted commas.
Ex: “The Master Vainglorious”
“The Tell-Tale Heart”
“The Key to Time”
“Burning Alexandria” (a chapter in the book Library: An Unquiet History)

3. Citations have not been standardized. In the past, the precedent has been that if you wish to include a works cited/bibliography you may do so; end notes/footnotes may be included in addition or on their own. See Steven Sautter’s “Outside the Conventions and Humdrum Routine of Everyday Life” in TTZ3, Lori Jansen’s “Thoughts on Regeneration” in TTZ2, and Ariann’s “Doctor Who: The Crusade” in TTZ1 for citation examples.

5. It is preferred that your articles are formatted with paragraphs and indentations rather than blocks of text separated by hard return. Also where possible please justify your paragraphs.

6. The editor prefers the First Doctor as opposed to the first Doctor, and will print it that was regardless of how you submit it. Again, consistency. Likewise TARDIS instead of Tardis or T.A.R.D.I.S. Series/season used interchangeably, though series preferred. Also, series four=season 30 and can be used interchangeably, based on the author’s preference.

7. Your article will not be rejected if you do not follow these rules, but if you can take a little extra time to follow them, your editor will like you more.

If there is any confusion or there is a situation in your article not covered in this style sheet, PLEASE ASK. Email me at: scots_rock_god@msn.com , comment on the blog or the Facebook group.

FYI on fonts: the title font used in TTZ is Beatnik and the body text font is Bernadette. I don’t expect you to use these fonts in your submissions; please just use a legible font, Times New Roman, Garamond, etc.

ahead of schedule, e'en

with the muses willing ...

I'm hoping to get TTZ3 up on the website for download by tomorrow night. In it you will find some great articles by our past contributors such as Steven Sautter, Tony Gallichan, Lori Jansen, and Jamie Beckwith, and also contributions from new writers and artists like Karen Dunn, Adi Covino, and Robert Beckwith. It also marks the first appearance of Back2theWhoture, another paper doll from moi, outstanding front and back cover from Lori, and interviews with Barnaby Edwards, Alistair Lock, and Richard Earl.

Thank you for your help making TTZ possible. Issue 3 is already bursting at the seams with new art and articles from writers and artists you've seen before--and some you haven't. Among them:

Please don't let that discourage you from submitting, though. What you write will get read, and if we don't have room for it this time, we'll get it in next time!

The deadline for submissions to TTZ3 has been moved from 24 May to 31 May, in hopes that we will all find life a little easier. Please send me your stuff on or before 31 May, then. Muchas gracias.

scots_rock_god@msn.com
or find the group on Facebook
or comment below
Posted by Le Mc at 17:45 No comments:

Sadly your editor has been kicked off Facebook for the moment, probably owing to the fact her devilishly clever handle is not her real name and ergo Facebook can't take the enigma. She hopes this will be rectified soon.

For the moment the group is still going so please don't run away.

TTZ3 continues to be shaped, please e-mail scots_rock_god@msn.com if you want to contribute.
Posted by Le Mc at 17:54 No comments:

Hope you are all enjoying the 2nd edition of the mag.

Print date for TTZ3 provisionally set for 7 June, ergo deadline for submissions is 24 May. This may change when I decide it is unachievable. Until then, come up with great ideas and send 'em in!

Okay, ladies and gentlemen, here it is!

followed by these awesome bookmarks Lori Jansen has included.

A note on errata: back in the day when I was on the staff of Scribendi Magazine, we had a team of 11 poring over every word and design feature for the magazine multiple times. On TTZ, it's me and my assistant editor. I know I'll never get the copyediting perfect, so though I doubt it needs mentioning, I've done the best I can. If you spot an error, by all means comment here, comment on the Facebook group, or e-mail me at scots_rock_god@msn.com and I will fix it as soon as I am able.

Other than that, please enjoy! And most importantly, please query & contribute--the mag doesn't go without contributions, and I would love to hear from you all.

Many, many, many thanks to to the contributors and especially to Aimee Steinberger and James Moran.
Posted by Le Mc at 19:46 No comments:

TTZ2 is nearly in the can. In it, you will find

All for free & all coming soon. Watch this space! 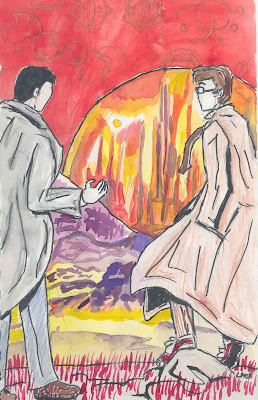 While I wait for contributors to send in their articles and stuff, have a little treat-- 'tis the cover.
Posted by Le Mc at 14:39 No comments:

Release date: 15 March
Therefore, you have to get your stuff in before 1 March. Okay, kiddums?

Seriously, though, send your stuff to scots_rock_god@msn.com
Posted by Le Mc at 22:34 No comments:

Labels: ttz2
Newer Posts Older Posts Home
Subscribe to: Posts (Atom)
A free 'zine for fans of Doctor Who new and old, welcoming all view points but particularly those of female fans. Its pages are packed with art, fiction, poetry, reviews, analysis, parodies, filk and general silliness with an aim to entertain, share and elucidate.

The Terrible Zodin's Wardrobe Provided By